Luis Miguel "Mike" Stumer and his wife now live in the suburbs of Phoenix, Arizona, where they are heavily involved with a local bullfight club.

In the 1960s, Stumer fought regularly as an American novilleros and was far more than just a novelty. A student of El Nene of Lima, he appeared in Peru, Bolivia and other South American countries, in both large and small plazas.

Unlike his teacher, Nene, who was regarded as a valiente, Stumer was artistic and dominating on the sand. He, however, never took the alternativa. regardless of this, he left his mark on the sand during his time spent there.

Of one can find old Toros magazines from the 1960s, it is difficult not to find something on him in the South American section. Mike's father was a correspondent for the publication and thus he had a publicity outlet built in for him.

Stumer often outshined his South American counterparts in the ring, such as Paco Cespedes and the like. He was truly a talented individual. 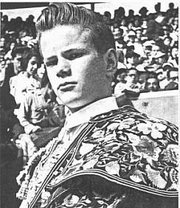