The Mexican matador, Fabian Ruiz of Aguascalientes, now makes his home away form the bulls in Sevilla, Spain, but he is not entirely absent from the fiesta brava. He oversees the career of his novillero son, who is active on the sand.

Ruiz took the alternativa in Tijuana in 1968 at the hands of Eloy Cavazos and Jaime Bravo. A year later, in this same ring, he was almost killed when he received a goring in the lung while working with the capote.

Suring his long career, Ruiz had varied triumphs in Plaza Mexico, but enjoyed his strongest cartel on the border. Tijuana, again, was a fortress for him, as was Juarez and Nogales.

On March 5, 1972, Ruiz gave a spectacular showing in Nogales alongside El Queretano, though he cut only an ear due to problems with the sword. The afternoon was otherwise considered by many aficionado to be one of his finest. Had he not had problems with the steel, he would have cut a tail from each bull.

Ruiz was especially skilled with the banderillas.

Though no longer active in the ring, the memories live on. 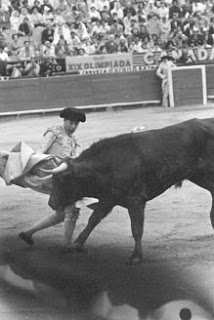