One of the most exciting moments in bullfighting comes not only when a matador places his own banderillas, but breaks the sticks down into stubs and places them in this fashion, known as the cortos.

El Cordobes received the worst goring out of many in his long career, when placing the cortos in Granada and afterward, never placed banderillas again.

In modern times, there are a whole new cast of matadores and novilleros who place the cortos, bringing excitement for aficionados in the stands everywhere. 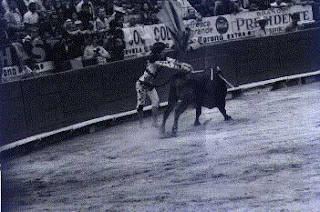