Guilermo Capetillo On The Border

Arguably, Guillermo Capetillo has been the most productive of all the clan, via film, music and bullfighting.

Over the years, on the border he ha had some of his greatest corridas and built much cartel

Nogales, in particular, has been the  location of some of his greatest past triumphs, most notably a corrida alongside Chilolin in the early1980s where he and his alternate both cut 4 ears and a tail, leaving on shoulders

Capetillo appeared in thi ring at other times too, likewise scoring a triumphant corrida mixta with novillero Carlos Gonzalez, where he cut an ear from his second bull. Had he not encountered problems with the sword, he would have won a tail.

Tijuana is another location where Capetilli had a number of successful corridas while alternating with his brother Manolo, as well as the likes of Manolo Arruza, Lomeli and others. While Nogales would have been his border stronghold, Tijuana served for a fortress for him as well.

Oddly, while he appeared numerous times in Juarez, his father and brother both had more success than he in this ring overall.

Mexicali was always a plaza where Capetillo seemed to encounter problems with the sword. Ditto for other border rings.

While a complete and capable torero with cartel throughout Mexico, the border was and is a Capetillo stronghold. 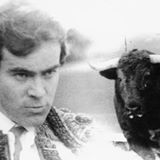