I. Gomez "Mayito" is a veteran matador. His stronghold has always been Tijuana, as the place of his birth and where he has his biggest following. He has many successful showings in the old El Toreo before it was torn down and in the Plaza Monumental. In 1990, he even won the Golden Sword in a competitive corrida there. He is still going strong in spite of aging.

Tijuana has seen other  native matadors before and since. Jesus Peralta, Rogelio Leduc, Pepe Hillo (the current Mexican, not the Spaniard killed in 1801) and Leonardo Manzano. Few, however, can come close to compare with Mayito in the charisma department.

He excelled as a novillero in Tijuana, though he did have one bizarre mishap during his career when in the midst of a molinete de rodillas, he somehow snagged his leg on the tip of a banderillas that had fallen out of the bull and was lying on the sand. He went to the infirmary to have the prong removed and returned to his next bull with a heavy bandage on, but still good to go.

One of his best Tijuana afternoons, though eh cut no ears, came in 1990 in a corrida alongside Manolo Arruza and L.F. Sanchez, facing bulls of La Mision. With his first bull he was daring with the capote, outstanding with the banderillas and was giving a faena that had the crow din an uproar, when he was tossed and took a puntazo in the arm. He returned to the bull, but had problems with the sword and lost the ears, but up to that point his presentation had really worked up the crowd. He took a vuelta before going to the infirmary for treatment.

With his second bull he opened with a series of frightening faroles de rodillas , placed three spectacular pairs of banderillas and gave a brilliant faena , but again lost ears due to problems with the sword.

Aside from the weak kills, his showings that day were possibly the best he ever offered in Tijuana.

Naturally, Mayito took the alternativa in Tijuana. Over the years, he appeared with some of the best in the Mexican bullfight. Alejandro Del Olivar, Minuto, Arruza, Herros, Portillo. The list goes on.
He also played himself in a suspense film about bandits planning to steal the bullring cash box at the Plaza Monumental, with his bullfight clips being shown in the movie.

Tijuana is of course not the only bullring Mayito has triumphed in. far from it. It is just that Tijuana is and always will be his fortress.

The banderillas have always been a main specialty for Mayito, especially the cortos. 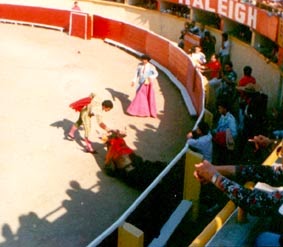