Everyone knows of Juan Belmonte. He took over 50 gorings in his long career. He was still fighting bulls and making love when elderly, but when his doctor forbade him to do either, he decided to shoot himself. They know of his constant triumphs in Sevilla, Madrid, Nimes and beyond. They know of his rivalry with Joselito and his suicidal style, in the ring.

What many do not know of is the time when Belmonte came to the border town of Nogales. A group of local businessmen on both sides of the border decided to promote the mano a mano of the new century in 1917, when Gaona was in his glory and Belmonte was taking Mexico by storm.

Since Nogales had no bullring at the time, the businessmen built one out of wood in hasty order.  The plaza de toros was established and filled as the two stars entered into action.

The contest of the decade did not transpire, for with his opening passes, Belmonte took a large goring in the leg that could have proven fatal.

This left Gaona or face all four bulls himself, which he did in grand form and he left on the shoulders of the crowd. Belmonte, however,  missed several contracts while recovering from the massive wound, leaving the bullfight far from the glorious competitive corrida everyone had envisioned. 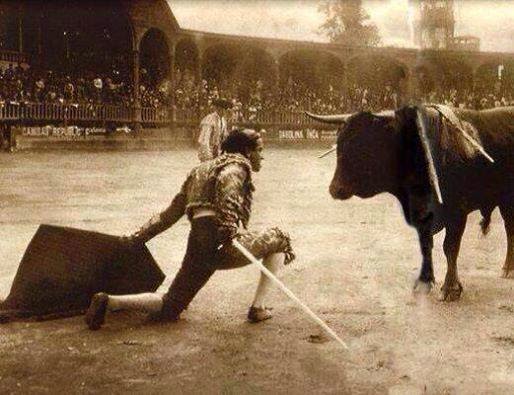