Diego Silveti, the son of the late David Silveti and nephew to retired great, Alejandro Silveti, put out an extremely successful season, confirming the hopes the aficion has had for him.

Silveti likewise had several corridas in France and Spain in 2014, including important corridas in Madrid and Sevilla.

The matador is presently campaigning  in South America for their taurine season.

So once again, the son of David Silveti has proven himself and will hopefully continue to do so in the season ahead.  He is fast becoming a rising star. 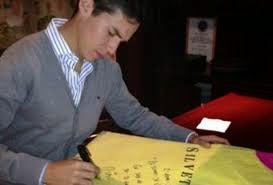