The ranch of Heriberto Rodriguez was founded in 1926 in Hidalgo, Mexico, and gained fame for producing brave, but extremely difficult animals that would quickly gore a man not experienced enough of face them.

In July of 1970, Fernando Dos Santos of Portugal had a great afternoon with these animals in Nogales. With his first bull,  he lost a possible tail due to faulty sword work and won only a  vuelta. With his second, an exceptionally  brave bull named Gaditano, he gave the faena of a lifetime, in  spite of one severe tossing and ended up leaving on shoulders of the crowd. The bull was granted an indulto and not killed in the ring. An account of this is to appear in the upcoming book, Fernando Dos Santos in Nogales.

The Heriberto Rodriguez ranch gained infamy int he 1940s when an example of the herd killed the rising novillero, Felix Guzman.

The fatal goring took place in Mexico City when Guzman was caught in the leg while working with the muleta. Rather than going to  the infirmary, the torero insisted on caping the bull further, killing it and taking a vuelta first. It was found that the wound was far more serious than anticipated with rpecuiosu time being lost by the novillero's actions. He died in the hospital shortly afterward. 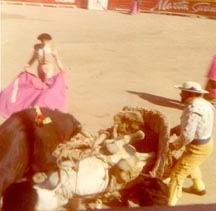