Mario  was an established matador de toros in the 1970s, especially noted for triumphs on the Mexican border in plazas such as Nogales, Tijuana and Juarez. He took the alternativa in San Luis Potosi in 1969 at the hands of Antonio Velazquez and Curro Rivera. the ritual was confirmed in Mexico City in 1971 via Finito and Raul Ponce De Leon.

Sevilla would be a regular on carteles in Plaza Mexico throughout his career, but his success record was varied in this ring.  His final few Plaza Mexico corridas either saw him gored or not being received well by the public, as opposed to earlier on in his youth.

Though a determined and brave matador, a number of bad horn wounds took their toll on this performer, including major injuries in Juarez, Mexico City and Tijuana. The Tijuana cornada was particularly bad, though eht ried to return to the offending bull and continue the faena. He was physically dragged to the infirmary. Moments afterward, the Spaniard, Marcelino Librero, was also gored, leaving Rafaelillo to then kill the remaining bulls/

One of Sevilla's last great showings came in Nogales in 1977, in the Golden Sward corrida alongside Diego O"Bolger, Salvador Farelo and Angel Sulbaran.  ' Farelo won the trophy by cutting two ears, but Sevilla offered a sound and artistic faena, with many long natural-passes, cropped with several molinetes de rodillas. He cut an ear for his effort.

Sevilla retired from the ring a few seasons afterward.

Mario may be read about in the English language in several old calrin magazones form the 1970s that crop iup  on Ebay. He is also feature din the book, Matadores, from http://www.floricantopress.com for orders.

Sevilla spoke English well, which made him a well-liked candidate for interviews by the American press during his border corridas.

The matador was evidently not very religious either. Assistants in his Nogales corridas noted he did not bother with the customary prayers after dressing in hsi room and wlaked right by the chapel in the same plaza, to take his place in the paseo. 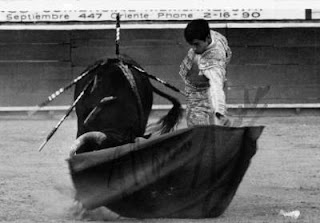