Leonardo Manzano was  born in Mexico City, but lived in Tijuana for so long hew as billed as being from there on the posters and mistakenly said to have born there in many publicity pieces.  Prior to entering the ring as a novillero, hew as a champion swimmer .

Manzano took the alternativa in 1`967 at the hands of Joselito Huerta and Manolo Martinez on Chihuahua. This was confirmed in Mexico City in 1968, from Manolo "Armillita" and Ricardo Castro.

One of Manzano's finest showings came in Nogales in September of 1970, when he and Arturp Ruiz Loredo both ciut a tail form their second bulls of the day, from Heriberto Rodriguez. Both men left on the shoudlers of the crowd.

With his first bull of that afternoon, Manzano was tossed and took a puntazo in the calf of his leg, but was not hindered by the same and continued to perform.

A repeat corrida the following month alongside the American, Robert Ryan. did not go  as well. Manzano took a vuelta from his first and was applauded from his seocnd, while Ryan cut the only ear of the day.

During his long career, Manzano was known especially for his work with he banderillas and his placing of the cortos, breaking the shafts down to make the danger paramount.

He was usually an accurate killer with the sword. 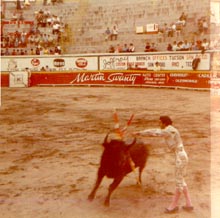