Bernardo Marin was a rising young novillero from Monterrey who was starting to make a name for himself in the Mexican rings, but died before taking the alternativa or becoming a star. As such, very little is remembered about him at all.

Marin was fatally gored at the Vista Alegre bullring in Mexico City on December 1, 1934. With the first bull of the day, he was working with the muleta and took a major wound in the leg, much like the one that would kill Paquirri decades later.

Marin was taken directly to a local hospital, but passed away a few hours after being admitted.

With time marching on, little else is remembered of him. 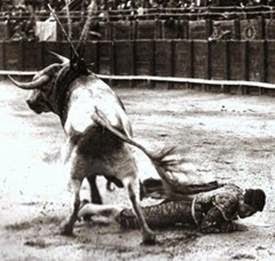