Not to be confused with the late South American matador of the same name, this Joselito Torres was born in Mexico in 1934. After a lengthy career with the novillos, he took the alternativa in Nogales sin 1957 at the hands of El Charro and Jose Ramon Tirado. The ritual was confirmed in Mexico City in 1963 at the hands of Callao.

Torres spent many years with the bulls, prior to retirement in 1975.

Nogales always was a lucky plaza for him, where he appeared numerous time sin the 1960s. Sadly, his last showing there in 1969 was a disaster when he failed badly with the sword and heard boos for one of the few times in his life. Manolo Urena upstaged him and cut an ear. Prior to this, Torres had some of his greatest showings ever in this ring, including an ears and tail winning performance some seasons prior to this.

Torres was especially known for the placing of the banderillas, with a marked distinction of removing his slippers and placing the sticks in his stockings.

A number of serious leg wounds never hampered him from continuing with the sticks. 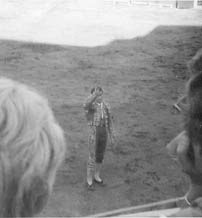