The Goring Of Ruiz

Fabian Ruiz was a fiery novilleros  from Aguascalientes who set the world on fire with triumphs in Mexico City and other major rings. In 1968, he took the alternativa in Tijuana at the hands of Jaime Bravo and Eloy Cavazos,  becoming a big star there as well.

While performing veronicas, he received one of the worst nonfatal gorings in Mexican history, when the bull veered into him, slammed him against the fence and gored him in the lung.

Only effective medical treatment kept him from joining the ranks of Manolete, Joselito, Granero, Malla and other names on the black list of arena fatalities.

Incredibly, Ruiz made a comeback, returning not only to Tijuana for several more corridas, but throughout Mexico as well. His career was saved, as was his life, by a major miracle. He continued to perform into the 1990s.

He presently makes his home in Sevilla, Spain. 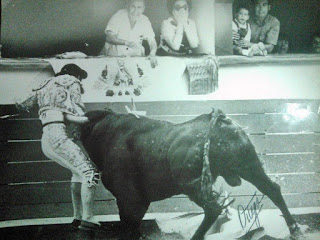