Antonio Campos "El Imposible" never reached figura status and remains a tragic figure in bullfighting, for he died from stomach cancer while in his prime.  Who knows how far he might have gone, for he did, a his name implied, hope to obtain impossible goals.

Sadly, again, he never met one of his objectives of being included in the "Big Season" in Mexico City, though he made it to Spain and achieved success there. He even managed to have a photo of himself materialize in a National Geographic article on Spain prior to his death.

Toros, a popular bullfight magazine in English from out of California way back when also devoted much time to him.

Campos is best remembered for his creation called the Pase El Imposible, an insane twirling muleta pass which he used to open his faenas, so complicated and dangerous it is no longer seen in bullrings today. The pass died when he did.

Again, one has to ask how far he might have gone had his health not failed him so terribly. This will never be known. 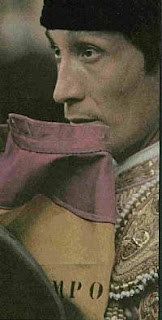