Though she comes from Yucatan, Lupita Lopez has become a female phenomenon of national recognition thin her native Mexico. It is a good time to be a lady bullfighter as this is an era
where such are being taken seriously, rather than as seen in decades past, be seen as a novelty.

Now a full matadora de toros, she has formed somewhat of a competition with fellow female performer, Hilda Tenorio . The two have appeared in numerous all female cartels in Mexico alongside other lady toreras.

Lopez has proven herself as capable as many male counterparts with capote, muleta and sword.  She continues to do so both along the border and in the major plazas within the interior.  She has also earned the respect of the aficion in Plaza Mexico.

Lopez has not escaped the bullring unscarred, for she has taken as of now, three serious gorings.

In spite of these injuries, she ahs returned to the bulls as sound of bravery and capability as ever.

It will be interesting to watch as her career continues to expand and improve. 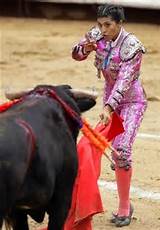