Guillermo Capetillo  continues to go strong in all of his chosen professions, be it music, film or the bullring. He is truly an ageless wonder.

The son, brother and stepbrother of bullfighters, he comes from a long line of tradition in the plaza de toros.

After a brief career as a novillero, Capetillo took the alternativa in San Luis Potosí at the hands of Manolo Martinez and Manzanares in 1977. It was confirmed in Plaza Mexico shortly afterward with Rafaelillo and Belmont.

In Plaza Mexico, Capetillo  did have one truly magnificent performance some years back that is still seen on copies on vhs and dv among the aficion, as well as Yu Tube, in which he silenced his critics by cutting ears and tail.

Some of Capetillo's finest corridas in Mexico historically came in the border town of Nogales, alternating with Chilolin, Carlos Gonzalez and others. One spectacular corrida saw him winning ears and tail alongside Chilolin, with both men leaving on shoulders in one of that plaza's finest moments.

Another tremendous border corrida saw Capetillo cutting a pair of ears in the placita of Agua Prieta, before a violent thunderstorm suspended the rest of the corrida.

Other plazas where this matador has triumphed over the years include Tijuana, Juarez, Aguascalientes, Guadalajara and more. While he has appeared in Spain in the past, he has never confirmed the alternativa as of yet in  Las Ventas.

Like a fine wine, Capetillo has improved with age.

More power to him. 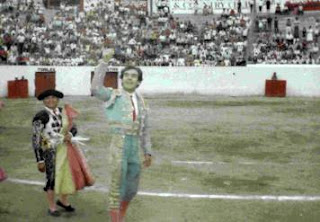