How To Enjoy A Bullfight Book Review

The book saw print in 1966, by Dick Frontain. The author is dead. The book is out of print. All but a handful of people depicted within the photos are dead. Some of the bullrings no longer even stand. Still, remaining copies of this book pop up on Ebay and in rare book stores now and again.

The thing is much of the material is dated, BUT from a technical standpoint this book remains one of the best ever when it comes to explaining a bullfight to newcomers. The passes are identified, the tercios covered and everything is presented as simply as possible.

This hold true even now.

Plus, Frontain's photos remain masterful., From purely historical settings, the action shots of Leal, Arruza, Calesero, Cordobes, Leal, Ordonez,  Rangel, Charro, Abaroa, Bernado, Velazquez and others are outstanding.  Most of these came form Nogales or Tijuana.

Again, the men depicted are now long retired or dead, but they live on in these splendid photos.

The passes they identify are still valid and as such this book remains one of the most recommended of bullfight guides, decades after seeing release. 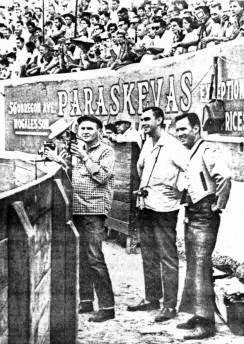