Federico Pizarro has been a mainstay in Mexican bullrings for many years now, rising from the ranks of a charismatic novillero to a full matador de toros. From his early showings in Plaza Mexico onward to some of the smallest of pueblos he has always maintained and endured. In bullrings large and small, he has made his name known.

Within the Mexican interior, Zacatecas, Jalpa, Orizaba, Torreon and Rio Grande  have been some of the settings for repeated triumphs,  while on the border, Tijuana and Juarez have been locations where he has offered some amazing faenas.

Though he has continually shown with the muleta, it is arguably with the capote that he is the strongest.

Pror to it being torn down, Pizarro was a familiar face at the Plaza Monumental in Juarez. He was seen regularly the last few seasons before the arena was demolished. One of his greatest showings there came in the summer of 2000 when he cut two ears.

Pizarro was born in Mexico City in 1971 and first started gainign attention for himself as a major novillero in the early 1990s. He took the alternativa in Juriquilla in 1993 at the hands of Nino de la Capea and Jorge Gutiererz. The ritual was confirmed the following year in Plaza Mexico with Capea and Gutierrez again carrying out the ceremonies.

Though he is not as active as he once was, he has put together quite a career for himself and one to be proud of. 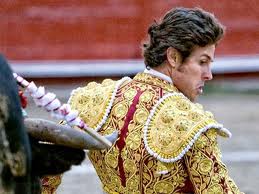