Peru has seen notable toreros in the past such as Freddy Villafiuerte, Nene and Cespedes. Enter  Jesus Chacon into the fray.

Born in Puqulo, Peru, Chacon now makes his home in Lima wher ehe ahs liced for a long time in order to be closer to the bullfighting action. He is a graduate of the bullfighting school centered in the plaza de toros de Acho.

As a novillero, Cgacon took the worst goring of his career in 2014 in the bu;llring in Churin. he had received a vuelta form his first animal and was well on his way to possibly cutting a tail when he was suddenly caught and the performance stopped.

In the two years since this time, Chacon has been seen in both the pueblos and the major rings, where he has caught the eye of the aficion, the press and the empresarios.

Recently, he did well in a bullfight alongside Cespedes and others, confirming the hope the aficion has for him.

Chacon could one day become the next Peruvian figura. 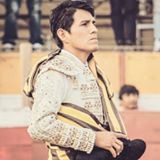