One of the first books written after the death of Manolete, concerning the tragedy in Linares, was by the critic, K Hito, who was an eye account witness to the fatal afternoon.  Long out of print, copies in used books stores go for $100 US or more.

The cover, showing the Cordoban maestro in death, is penetrating. There are no photos of the horrible goring as Cano, the key photographer that day, hung on to these for years and wanted outrageous fees to release them. Instead, sketches depict the fatal wound and how unspectacular it was. Manolete, in his final sword thrust, was hardly even lifted off his feet, spinning like a pinwheel as the horn entered his groin.

The book covers what has to be assured to be an accurate portrayal of the last corrida, starring Manolete, Gitanillo and Domnguin, with Manolete going out in a blaze of glory. The tale has been told and embellished upon again and again, both in book and film.

A few years back, the Manolete movie was released form Spain, with a young actor named Nacho giving an interesting performance as the smirking, arrogant Dominguin, out to win Manolete's throne, but aside from this, inaccuracies abound.  Watch the movie to be entertained an to see nacho as Dominguin, though he is far shorter than Luis Miguel. He has the smirk and the mannerisms down to the letter. AS for the plot, it is all drama, but very little history. Yes, there was a man named Manolete, he did get killed by a bull and he did romance a minor scale film actress, but that is about the spot where accuracy stops. In the movie, Dominguin might have finally gotten the last posthumous laugh on his rival, for the man playing him steals the show, from all the other actors, including the stars. Watch the movie for fun, but read a good book instead for the real picture. The K-Hito product is one of the finest.

For a likely and accurate portrait of what went on in Linares that day, try to find this book. It is well worth the price some dealers want. 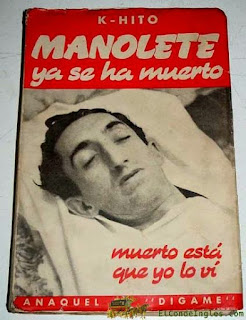