Paco     Pavon remains one of many tragic tales in bullfighting. The son of a ganadero who had ample time training on the ranch, but only a few actual novilladas, appeared in  a full corrida  de toros in Mexico City with huge bulls of Penuelas, as a sobresaliente. This 1958 event was one where Pavon  had hoped to showcase himself when the opportunity arose, but things    did not work as planned.The billed matadores de toros on the cartel were Luis Procuna  and Calesero.

One of the matadores on the card motioned for Pavon to enter the ring to make   quite. Bent on triumph or disaster, the young torero found the latter instead.

The young man's ambition aws there, but his ability to  face such a large animal was not. He flipped the capote over his head for a farol, but on the second try the animal just jerked its head, hooking into him and throwing him through the air like a paper airplane.

Pavon seemed to be walkie in the air as he came down to the sand and landed in a heap, with his  white and silver traje de luces already covered with blood and a huge wound in his abdomen.

Though horribly gored, Pavon managed to fight off death for several days in the hospital before his body could take no more and he passed away.

The sounds of trumpets faded and the dreams of glory passed away as surely as the novillero himself. Pavon  entered the ring looking for eternal fame and found it only it the form of his name being added to the black chronicle of those killed in their profession.

Decades have passed since this tragic incident and sadly Paco Pavon     remains scarcely remembered for other than his foolhardy bravery which extracted the ultimate price. 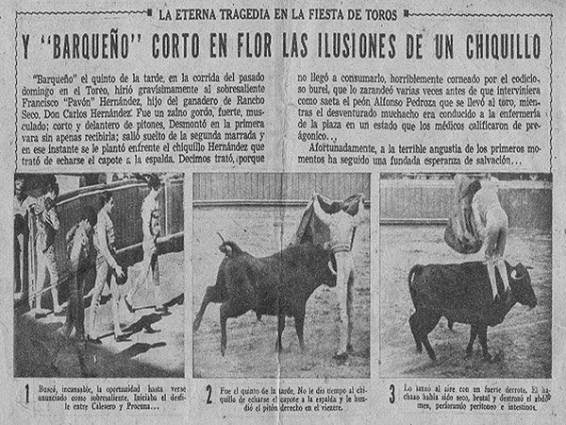