Manolete, by Dale Pierce, takes a rare and unique look into the life and death of this celebrated matador. Aside from the obligatory chapter on his final corrida in Linares, there are several other segments as well that are unique.

One chapter deals with what other people who knew or came on the scene later and knew only of Manolete is included.

Another chapter deals with the darker side of Manolete and some of his flaws, including his drinking, the horn shaving scandals and his misuse of power to keep potential rivals down. Most curiously, his fear of dentists is noted. When in Mexico, a dentist/aficionado offered to repair a painfully decayed tooth for free, but the torero refused.

Luis Miguel Dominguin is examined very carefully and it is considered whether or not he received a fair shake in history, while being blamed in lore as the culprit who pushed Manolete to his death,

There is also a chapter on the Manolete movie that came out a few years back.

The book is available on book and e book at Lulu.Orders at http://www.lulu.com/content/6804368 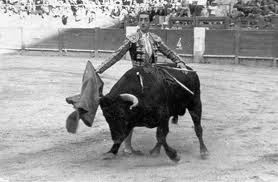